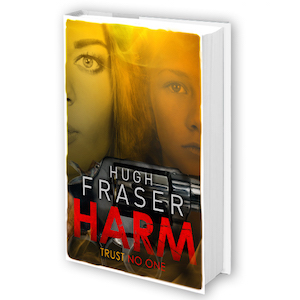 The action-packed thriller centres on the adventures of a beautiful and beguiling contract killer. The heroine, Rina Walker, grows up in post-war Notting Hill amongst a background of poverty, petty crime and gangland ‘protection’. In two parallel stories, the reader discovers what drives an innocent girl to murder in self defence, and how she evolves into a ruthless assassin. Much of the action takes place in Mexico where drug barons compete for territory and traffic – but whose side is Rina on and who is she really working for?

Harm is a fast-paced, adrenalin-fuelled page turner that features violence and sex. It mixes gritty realism with pure escapism and makes for an exciting read.

Hugh Fraser is best known as the actor who played Captain Hastings alongside David Suchet in Agatha Christie’s Poirot in the long-running and much-loved television series. It seems that some of Agatha Christie’s imagination for criminal plots has rubbed off on him as in July 2015, Hugh makes his debut as a writer with his first novel, Harm.