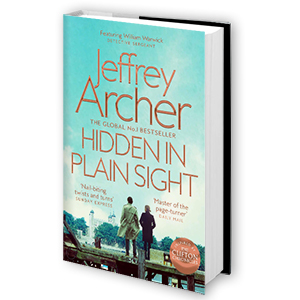 Hidden in Plain Sight is the second title in the best-selling William Warwick series. We provided contracts management for the author’s foreign rights sales under our new service for literary agents.

‘Newly promoted, Detective Sergeant William Warwick has been reassigned to the drugs squad. His first case: to investigate a notorious south London drug lord known as the Viper.

But as William and his team close the net around a criminal network unlike any they have ever encountered, he is also faced with an old enemy, Miles Faulkner. It will take all of William’s cunning to devise a means to bring both men to justice; a trap neither will expect, one that is hidden in plain sight . . .

Filled with Jeffrey Archer’s trademark twists and turns, Hidden in Plain Sight is the gripping next instalment in the life of William Warwick. It follows on from Nothing Ventured, but can be read as a standalone story.’

‘Jeffrey Archer has topped the bestseller lists around the world, with sales of over 275 million copies in 97 countries and more than 37 languages. He is the only author ever to have been a number one bestseller in fiction (nineteen times), short stories (four times) and non-fiction (The Prison Diaries).

His latest novel THIS WAS A MAN, the final volume in a seven-book saga called The Clifton Chronicles. was published in hardback in November 2016, and went to #1 in the UK, India, Australia, New Zealand and South Africa, and is out in Paperback in May 2017. The penultimate book in the series, COMETH THE HOUR which came out in March 2016, also went to #1 around world, including on the New York Times Besteller List.