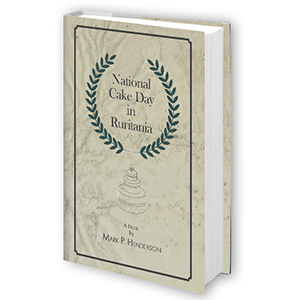 Rory fancies Ariadne.
Ariadne considers him irresponsible.
When they both travel to Ruritania – a country of no fixed location – Rory’s capacity for trouble is increased. He becomes embroiled in Ruritania’s political unrest and is soon being hunted by both the Communist revolutionaries, led by the fascinating and elusive Klarissa, and the national security forces and their British allies. He even faces a life-threatening situation in the Faerie Realm, with which Ruritania is closely linked. Before National Cake Day, the summer solstice, Rory must exercise all his skills in logic, marathon running and Morris-dancing to save his life, prevent a national crisis and discover why Britain’s secret service wants to protect Ruritania’s government.
And – perhaps – to win Ariadne.

After retiring from a career in medicine and university teaching, Mark P. Henderson moved to the Derbyshire Peak District in 2002 and started to write fiction and collect local folktales. Several of his short stories and poems have appeared in magazines and anthologies. His books, released by various publishers, include an anthology of short stories (Rope Trick, 2008),a children’s story (Fenella and the Magic Mirror, 2009), a study of the origin and evolution of a local legend (Murders in the Winnats Pass, 2010), a collection of 62 traditional Peak District stories (Folktales of the Peak District, 2011), a collection of puns in verse and prose (Cruel and Unusual Punnishments, 2016), a one-act play (Forget it, it’s History, 2017), and two novels (National Cake Day in Ruritania, 2018, and The Engklimastat, 2019). He’s in increasing demand as a storyteller to adult audiences around North-West England, and as an editor and a creative writing tutor. For details see http://www.markphenderson.com/

Mark P. Henderson: ‘Before I considered submitting my novel National Cake Day in Ruritania to a publisher, I sent the draft to Lorena Goldsmith of Daniel Goldsmith Associates. For personal reasons I’d been unable to write and publish anything for several years and I’d lost confidence in my literary ability, such as it ever was. Lorena’s critique on National Cake Day was constructive but insightful, and although it drove me into substantial rewriting of the text it did much to restore my self-belief. By acting on her advice I was able to transform the draft into a manuscript that a publisher might consider, and indeed Fantastic Books Publishing did consider it and finally accepted it. They released the book in November 2018.

I also acquired Lorena’s excellent guide-book Self-editing Fiction that Sells (How To Books, Oxford, 2013) and followed the advice in it as I wrote my next novel, The Engklimastat; which has now been accepted by Fantastic Books and is due to be published during the summer of 2019. I’m very grateful to Daniel Goldsmith Associates for their help, which has proved invaluable.’