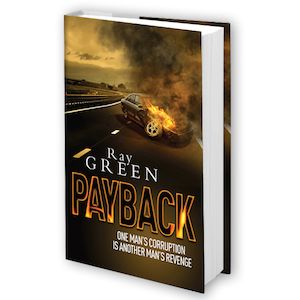 Roy Groves is the Operations Director of a successful company manufacturing dashboard instruments for luxury cars. A fatal motorway fire is traced back to a fault in the product supplied by Roy’s company. Was it a tragic accident or something more sinister? As Roy and his colleagues battle to establish the cause of the fire, and save the company from bankruptcy, they discover that they have been the victims of sabotage. Eventually it emerges that an old enemy of Roy and the rest of the team has reappeared and is intent on destroying the company and every member of its management team. Once just a business adversary, their nemesis is now so consumed with hatred that he is on the edge of insanity, and resorts to blackmail and even murder in the pursuit of his goal.Payback is a chilling tale of how hatred can twist and corrupt the human soul.

Ray Green: “Having completed and published my first novel, Buyout, I was keen to write the sequel, Payback, in which the characters comprising the management team in Buyout run into even stormier waters as a vicious enemy seeks to settle old scores. I had learned so much from Katie Green and Lorena Goldsmith while writing and publishing Buyout that my second book took little more than half as long to complete. This was largely because my first draft was so much nearer to the finished product this time. I was aided immeasurably by the timely arrival of Lorena Goldsmith’s book, Self-editing fiction that sells, which is, in my opinion, a must read for budding authors. It helped me produce a manuscript which required far fewer revisions at both manuscript assessment and copy-editing stages. I’m hooked on writing now, so there will be a third book in the series, Chinese Whispers. Naturally, I’ll be working with Daniel Goldsmith Associates on this one too.”