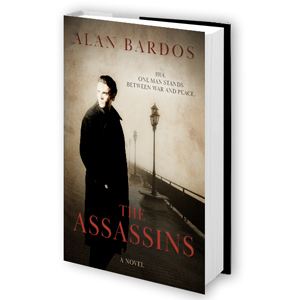 Tensions are reaching boiling point in Europe and the threat of war is imminent.

Johnny Swift, a young and often brash diplomatic clerk employed by the British embassy is sent to infiltrate the ‘Young Bosnians’, a group of idealistic conspirators planning to murder Franz Ferdinand, the heir presumptive to the Austro-Hungarian throne, in a bid to liberate their country from the monarchy’s grip.

Johnny has been having an affair with his employer’s wife, Lady Elizabeth ‘Libby’ Smyth, and suspecting he’s being cuckolded, Sir George Smyth packs Johnny off on a mission to infiltrate the Young Bosnian cell with every confidence that that’s the last time he’ll be seeing his cocky young clerk.

But Johnny has a lot of living still to do and is not the type to embrace his ‘destiny’ when it starts to look like it will ultimately end in an untimely death.

In an action-packed thriller, the compelling and tragic story of the assassination of Archduke Franz Ferdinand, and his beloved wife ‘Sopherl’, Sophie, the Duchess of Hohenberg, in Sarajevo is played out against a backdrop of simmering international tensions that have world-changing political reverberations.

Johnny manages to infiltrate the Young Bosnian conspriators’ cell, helped by Lazlo Breitner, a Hungarian Civil servant in the joint ministry of finance and a staunch monarchist acting on an anonymous tip-off about a serious threat to the Archduke’s life during his forthcoming visit to Sarajevo by a group of young local dissidents.

However, Johnny soon realises he’s in over his head, with gambling debts and a taste for beautiful women the very least of his problems as he struggles to survive on his wits in an increasingly complex world of political espionage and deadly threats.

In a convincing re-telling of the tragic real-life events that precipitated a world war, Alan Bardos manages to take the known facts – that the conspirators were young nationalist fanatics, able to dream of revolution but unable to act without the backing of the prominent Colonel ‘Apis’ Dimitrijevic, or that the whole thing was Apis’ idea, and that it was the Colonel himself who actively sought out, recruited and instructed the assassins for his own political agenda.

Whichever’s the case, in no time at all Johnny Swift finds himself embroiled deep within an increasingly deadly political situation that spans Europe and threatens to drag Britain to the coming inevitable war. Unable to trust anyone, and with the very lives of the royal couple unexpectedly in his hands, Johnny tries to avert catastrophe.

Using both fictional and actual characters and events, Bardos has crafted a heart-racing story of love, royal duty and political intrigue which expertly uses the historical evidence available to create a believable narrative arc, ultimately allowing the reader to draw their own conclusions as to what actually happened on one fateful day in Sarajevo…”

Alan Bardos is a graduate of the MA in TV Script Writing at De Montfort University, and he also has a degree in Politics and History from Brunel University. He writes historical fiction and loves researching historical events and characters. He currently lives in Oxfordshire with his wife.