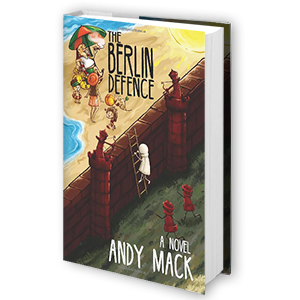 ‘That afternoon, Lothar sat down opposite Lev Ivanov, and with a furrowed brow, determinedly pushed his King’s pawn forward two squares, punching down the clock as he did so. When Ivanov ventured a Sicilian Defence, Lothar sacrificed first a Knight and then a Rook for a raging attack.

Lothar Hartmann dreams of reaching the big time in chess. Overcoming the mind-games of his opponents at the chessboard is a challenge in itself, but how will he cope when he comes face to face with the political manipulation and oppression of his own corrupt government? A tale told with dark humour of love and loss, hopes dashed and regained, it is a window into a world of tactics, psychological warfare and the balance of fate and opportunity, while asking fundamental questions about life’s purpose and moral choices. As Lothar begins to realise that his world is not simply black and white, and that the chess players themselves are pieces, moved across a board to further the reach of East German propaganda, he hatches a plan that defies all expectations.’

‘As a relatively new author, I found the service provided by DGA incredibly helpful. I sent a draft of the novel in for manuscript assessment at an early stage. At that point, the book still needed quite a bit of polishing (and the odd re-write in one or two places). The reviewer was wonderfully tactful, and what could have been a difficult process was actually very positive. I came away feeling that I could definitely succeed with the novel. I just needed to keep working at it. And most importantly, without giving me the answers, the reviewer gave me some valuable tools and techniques which I can use in the future – a bit like teaching someone to fish. I followed that up with a second review, and some months down the line, I got accepted by a publisher. I’m very grateful to all the team at Daniel Goldsmith Associates for their care, attention, expertise, and above all, their genuine interest in the people they help. A first rate service.’ Andy Mack