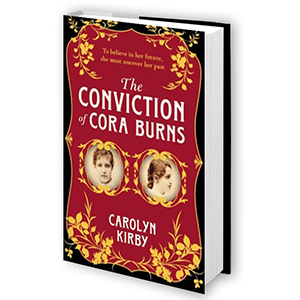 The Conviction of Cora Burns

The Conviction of Cora Burns (formerly Half of You), an exceptional manuscript we discovered in our 2017 edition of The First Novel Prize, is a historical fiction debut about mental health in Victorian Britain through the story of an unforgettable protagonist.

The rights have sold both in the UK and in the US with March 2019 release dates.

From the UK publisher, No Exit Press:

With the power and intrigue of Laura Purcell’s The Silent Companions and Sarah Schmidt’s See What I Have Done, Carolyn Kirby’s stunning debut takes the reader on a heart-breaking journey through Victorian Birmingham and questions where we first learn violence: from our scars or from our hearts.

Birmingham, 1885
Born in a gaol and raised in a workhouse, Cora Burns has always struggled to control the violence inside her. Haunted by memories of a terrible crime, she seeks a new life working as a servant in the house of scientist Thomas Jerwood. Here, Cora befriends a young girl, Violet, who seems to be the subject of a living experiment. But is Jerwood also secretly studying Cora…?

Originally from Sunderland, Carolyn Kirby studied history at St Hilda’s College, Oxford before working in social housing and then as a teacher of English as a foreign language. Carolyn has two grownup daughters and lives with her husband in rural Oxfordshire.

Buy The Conviction of Cora Burns