Home > Portfolio > The Death of Baseball 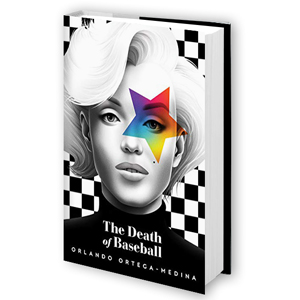 The Death of Baseball

Former Little League champion Kimitake ‘Clyde’ Koba finds strength in the belief that he is the reincarnation of Marilyn Monroe as he struggles to escape the ghost of his brother and his alcoholic father.

Born on Yom Kippur, teen prodigy Raphael Dweck has been told his whole life that he has a special purpose in God’s plan. The only problem is, he can’t shake off his doubts, his urges, or the trail of trouble and ruin that follow in his wake.

A decade later, Raphael and ‘Marilyn’ find each other wandering the plastic-bright streets of Hollywood and set out to make a documentary about the transmigration of souls. But when the roleplaying goes too far, they find themselves past the point of no return in their quest to prove who and what they are to their families, God, the world, and themselves.

Japan and Israel collide in the City of Angels in this explosive psychological thriller about faith, idol worship, and the search for identity by the author of Jerusalem Ablaze – Stories of Love and Other Obsessions.

Buy The Death of Baseball