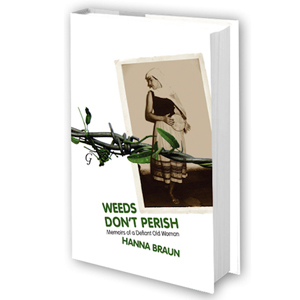 Weeds don’t Perish is the story of Hanna Braun; a passionate, wry, rebellious woman with a zest for life. Her story begins in 1937 when her Jewish family are forced to flee Berlin to escape persecution. Hanna finds herself living in Palestine aged ten, and is swept away by Zionist ideology, joining the Haganah at the behest of her uncle. The childlike innocence with which she enthusiastically adopts this new belief system is replaced by the slow realisation that racist views and political segregation dominate her new homeland. As she witnesses first-hand the Arab revolt against the British mandate, the growth of Jewish settlements encroaching on Palestinian land, and the atrocities of Deir Yassin, Hanna begins to question her allegiances, and ultimately betrays them. Her later years are filled with love and laughter, as Hanna moves to England, becomes a wife and mother, and finds her true calling teaching English and Dance to students in Zimbabwe. But they are also marked by painful experiences, as she encounters more ethnic and racial intolerance wherever she goes, and comes face-to-face with her past, confronting the reality of being a child of war whilst visiting holocaust memorial sites around Europe. Like the proverbial weed however, Hanna has never given up and refuses to be beaten. Instead, she continues to this day to fight passionately for causes close to her heart – human rights and equality for all. (Publisher’s Description)